REJECTED probably should have been the title of this blog post. BUT -- what can ya do? Just keep on trying :) I'm sharing a tag with you today that I had previously submitted for print to a magazine. Due to FULL FRONTAL NUDITY it has been rejected.

It's cool.. it happens. it makes a little bit of sense. and it just gives me the opportunity to share it with you now! So here is my Immortality Among the Stars Tag -- you may sense a little bit of familiarity with this tag -- it was the inspiration for one of my pieces from the 31 days of stamping event. 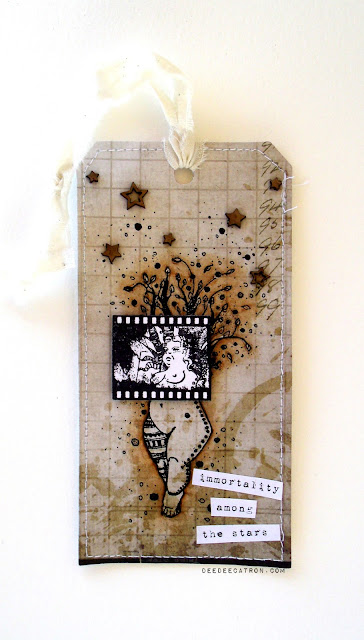 Mmm... sigh. I love this tag ♥ The base is a piece from my Lost and Found collection for 7 Dots Studio. I adore the line in all its vintage glory, and also because cutting a tag from those sheets requires very little manipulation to have a great background and or base. 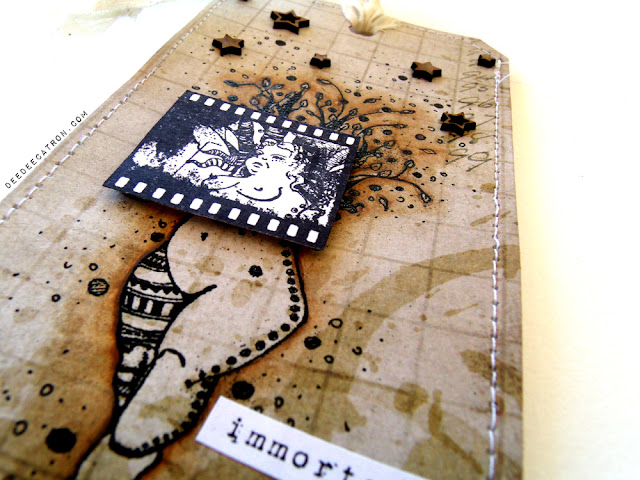 I used my sewing machine to sew around the tag.. giving it a border of white and helping create a boundary. I really enjoy machine stitching on paper... two contrasting elements that work well together. I've used two stamps from Viva Las VegaStamps!. One designed by Mary Vogel Lozinak : Whimsical Tree Lady. The other by me : Film Strip. First I stamped the Film Strip on a scrap of white paper with Ranger Archival Ink... then I stamped the Whimsical Tree Lady twice.. once on the background of my tag in Ranger Archival Ink and embossed with WOW Embossing Powder, and then once on top of the film strip in Archival, making sure to mask off the reel holes of the strip.

The Tree Lady was then outlined in a Faber Castell / Design Memory Craft's Aquarelle Grip Watercolor pencil. I used a small paintbrush and some water to feather out the intensity of the pencil making a nice gradient of color around her. I trimmed out the film strip and popped it up using dimensional adhesive. 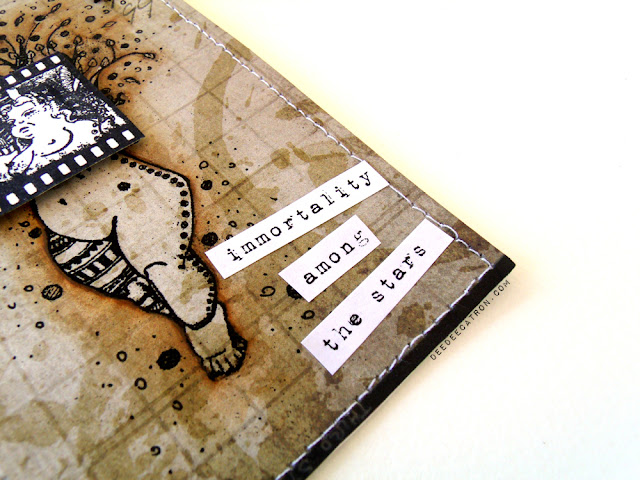 After the watercolor pencil was dry I used a PITT pen to draw circles around the girl, just adding a bit of contrast to the background while playing off the whimsy of her "hair." I also printed up a saying on some cardstock using my inkjet printer and glued it down with a UHU stick. The idea of the whole tag is that this beautiful voluptuous gal is forever immortalized in film. 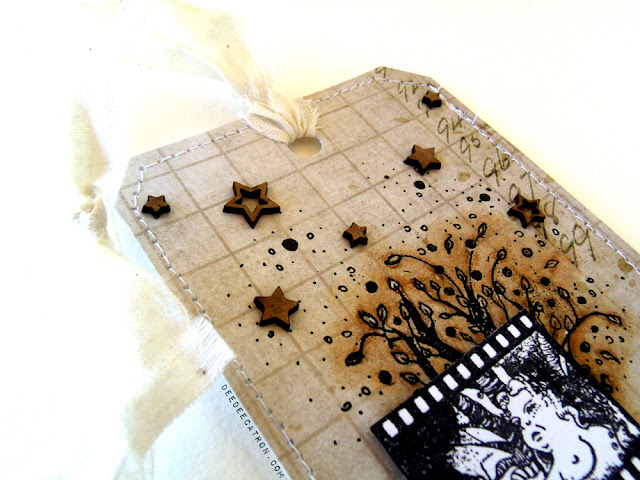 And last but never least, the tag was finished off with a scatter of Star Confetti Chipboard from UmWowStudio. I left it in the natural raw kraft color to accent the vintage tones of the entire tag. I had a scrap of natural colored muslin laying on my desk that ended up being just the perfect touch to tie *pun intended* off my tag. Love when those little pieces fall together like that.